Frisco — A proposal for an affordable housing project remains under review at the state level even though the Frisco City Council voted Tuesday to deny its support.

A letter of support from Frisco officials would have boosted her chances in the highly competitive program that awards federal tax incentives to developments that offer rents at below-market rates.

Instead, the council initiated the process for an involuntary annexation of that property and other undeveloped lots around it. Officials said they want more control over what gets built there. Because the area is in Frisco’s extraterritorial jurisdiction, developers do not have to comply with city standards. 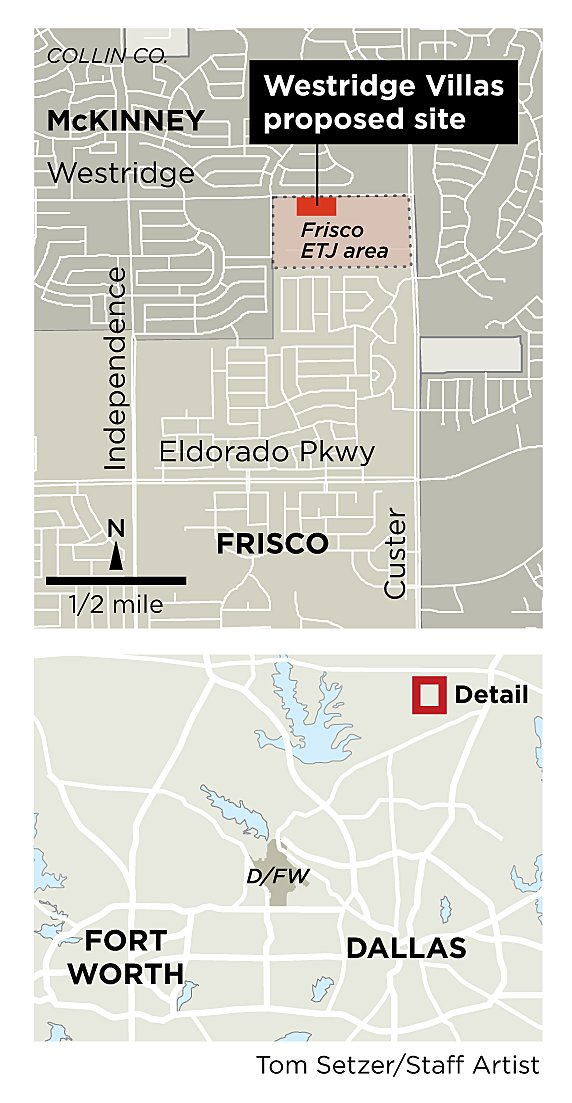 Anderson, president of Coppell-based Anderson Development & Construction LLC, told the council she has been working with city planners to address concerns. Among the changes she made was lowering the project’s density from the 140 units originally proposed.

“Even though you may not agree with every income strata being in your community, there are many individuals who are already here who definitely need the housing,” she said.

Several neighbors spoke against her project. They cited concerns about traffic congestion on the two-lane road and the difficulty in widening it. Some talked of flood issues. Others spoke about the lack of building standards on the county land.

Frisco’s zoning ordinance, for example, requires a minimum of 5 acres for a multifamily development. This project would be built on about 4.92 acres.

Heather Gibb told the council that she’s lived in affordable housing projects similar to what’s being proposed. She said that despite the developer’s good intentions, the quality at the complex will go down sooner or later.

Frisco council member Tim Nelson said he couldn’t support the project because “this particular location and timing do create some challenges.”

Council member John Keating said people expect consistent enforcement of the city’s standards. “I can’t support apartments in one part of town that aren’t the same as apartments in the rest of Frisco,” he said.

Council members voted 6-0 Tuesday against submitting a letter of support for the project. The city will move ahead with public hearings in April to consider the involuntary annexation.

The Texas Department of Housing and Community Affairs received 19 completed applications for the Housing Tax Credit program in Region 3, which includes Frisco. Other projects seeking tax credits are proposed in Dallas, Anna, Fairview, Garland, Plano, Rowlett, Wylie and Fort Worth, among other cities.

The state board overseeing the tax credit program has $11.1 million to allocate for this region. The board and its staff will review the projects. A decision is expected in July.

Neighbor Deidrea Laux, who has taken a lead role among residents opposed to the project, said efforts will now turn to the state level.

“We need to make sure our tax dollars are put to good use,” Laux said.

Want to Advertise on this Site?

How To Know If Its Time To Buy A Home

Owning your own home has long been part of the American dream. It's a goal most of us rightfully aspire to, and one that can often help build wealth. Indeed, 64% of Americans own a home today. If'

Did you know that strawberries have been around since ancient Roman times; and were used for medicinal purposes such as: alleviating inflammation, fever, kidney stones, bad breath, gout and more!

The Telltale Signs Its Time To Refinance

Have you been giving some thought to how you might be able to save money if you refinanced your mortgage? How do you decide if it’s really worth it? Here are four signs that show you might

By registering, you agree to our terms of use and that real estate professionals and lenders may call/text you about your inquiry, which may involve use of automated means and prerecorded/artificial voices. You don't need to consent as a condition of buying any property, goods or services. Messages/data rates may apply.